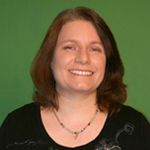 Lucy Snyder writes some kick-ass horror, along with dark, twisted science fiction and fantasy. She’s won multiple awards and probably given nightmares to a lot of people. Yet the first time I met her, I actually wondered if this quiet, unassuming woman was the same person who wrote such hard-hitting fiction. Then I got to know her, and realize that Lucy is one of those people who speak softly but carry a big stick—in her case, that stick is the words she puts on paper.

A Tale of Three Covers
by Lucy A. Snyder

Raw Dog Screaming Press published my newest book While The Black Stars Burn a few months ago. It’s the follow-up to my previous RDSP collection, Soft Apocalypses, which won the Bram Stoker Award. Most of the stories in this collection are tales I’ve written in the past two years. The book is a mix of horror, dark science fiction, and dark fantasy. Many of the stories have Lovecraftian and King in Yellow mythos themes, and the stories all feature female protagonists, most of whom are struggling against terrifying family situations.

And so far, While The Black Stars Burn has been noticeably outselling Soft Apocalypses.

But really, I think it’s because of the cover.

This is to cast no aspersions upon the fine cover that Brad Sharp created for Soft Apocalypses. It’s mysterious, cleanly designed and subtle. It conveys menace without employing gore. It’s a good cover, and I like it quite a lot:

But the cover Italian artist Daniele Serra created for While The Black Stars Burn is nothing short of gorgeous:

Serra’s been creating covers for a whole lot of Lovecraftian and weird fiction books lately, and it’s easy to see why. He’s an amazing talent, and I’m thrilled that the folks at Raw Dog commissioned his work for my book. This cover is even prettier on the trade paperback than it is on screen.

Serra’s style is unmistakable. Further, because he has done so many weird fiction covers lately, seeing his work on a book is a clear cue to readers about the kind of fiction they’ll find inside. Aesthetics aside, it’s likely that his art simply does a better job of conveying to potential readers that my collection has the type of stories they’ll enjoy.

Cover cues to readers are hugely important. I love the cover Deena Warner created for my first collection Sparks and Shadows. It’s beautiful. If you look closely, you’ll see that she created a very subtle demonic figure rising against the starry sky in the background:

Do you see the demon? It’s there, and it neatly conveys the dangers my characters face. Trouble is, it’s too subtle for many readers who just glance at the cover and see the girl dipping her hand in the water. As a result, at book fairs I’ve had more than one parent pick up my book and say “Oh, is this young adult? I might get this for my kid.” Whereupon I have to explain that no, it’s got graphic sex and violence both, and isn’t suitable for most 10-year-olds.

Creating good cover art is difficult enough when you’re dealing with a novel. But collections with their many plots and themes are even tougher challenges. I’m in utter admiration of artists who can look at a collection, find a unifying image that conveys the contents to the right set of readers, and bring it to expert life.

Lucy A. Snyder is a four-time Bram Stoker Award-winning writer who wrote the novels Spellbent, Shotgun Sorceress, and Switchblade Goddess. She also authored the nonfiction book Shooting Yourself in the Head for Fun and Profit: A Writer’s Survival Guide and the story collections While the Black Stars Burn, Soft Apocalypses, Orchid Carousals, Sparks and Shadows, Chimeric Machines, and Installing Linux on a Dead Badger.

Her writing has been translated into French, Russian, Italian, Czech, and Japanese editions and has appeared in publications such as Apex Magazine, Nightmare Magazine, Pseudopod, Strange Horizons, Weird Tales, Steampunk World, In the Court of the Yellow King, The Library of the Dead, Seize the Night, and Best Horror of the Year, Vol. 5.

She lives in Columbus, Ohio and is a mentor in Seton Hill University’s MFA program in Writing Popular Fiction. She also writes a column for Horror World. You can learn more about her at www.lucysnyder.com and you can follow her on Twitter at @LucyASnyder.

January 26, 2017
Catherine Cavendish is the author of  several novels and novellas, including The Devil's Serenade, Dark Avenging Angel, Saving Grace Devine, and The Pendle Curse. Today she's here to talk about some rather unsettling imaginary friends. When you were growing up, did you have an imaginary friend? Did they seem real to you? Maybe sort-of-real. You could talk to them, imagine their responses, play with them - but you probably kept the ‘relationship’ within certain boundaries, however young you were. In my case, I invented an entire family of siblings – three sisters (two older, one a few years younger) and an older brother who looked out for us girls. Being an only child, I found them comforting, and fun, but I never imagined them to be real. They, in turn, kept themselves firmly lodged in my own mind and never attempted to cross any boundary into the real world. In my novel, The Devil’s Serenade, my central character also had an imaginary family when she was a child
11 comments
Read more

January 04, 2019
So, I recently finished reading the holiday-themed horror anthology Hark! The Herald Angels Scream , edited by Christopher Golden and published through Blumhouse Books. As you can probably deduce, the antho's theme is holiday-oriented stories. Some involve Christmas, some Yule, and some just the general winter season of December. All of them have a dark core, and the stories range from outright horror scares to subtle suspense, with more than a few falling in the 'weird fiction' category. The TOC includes some of the genre's biggest names (Joe R. Lansdale, Sarah Pinborough, Jonathan Maberry, Kelley Armstrong, Josh Malerman) along with several acclaimed authors who aren't in the public eye but should be. My favorites in the anthology are "Mistletoe and Holly" by James A. Moore (a gleefully twisted take on the old adage of be careful what you wish for), "Love Me" by Thomas E. Sniegoski (a poignant example of how trying to do the right thing
13 comments
Read more